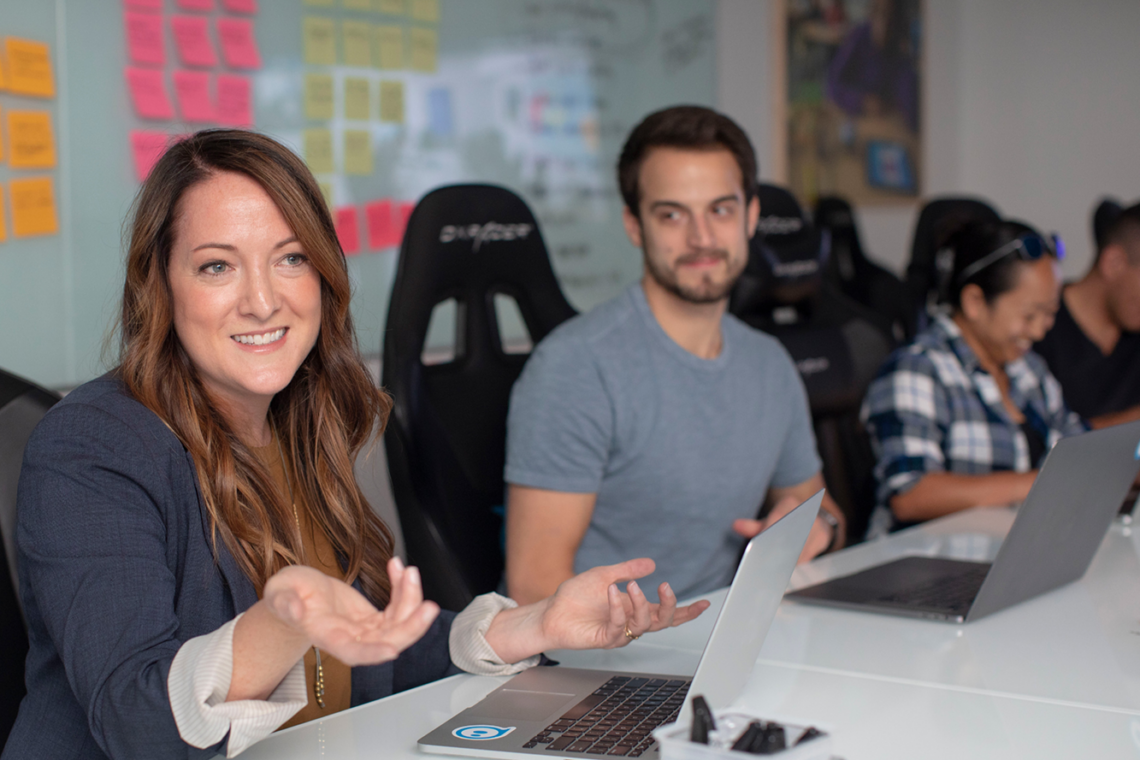 In the middle of 2018, John Doerr stood up at a Ted Talk and announced the “… secret to success is setting the right goals”. Since then, his concept of Objectives and Key Results (OKRs) has been adopted widely by organisations large and small.

Whilst there is no doubt that used well OKRs are an amazing tool for bringing focus, and driving innovation there are plenty of stories of OKRs being used not so well.

At their best OKRs:

When poorly applied, they end up:

When used poorly, they end up miring staff in confusion, or just being a re-branded list of KPIs that achieve nothing. So, how can you approach OKRs in a way that emphasises the good and avoid the bad? Here’s my opinionated take on the subject.

Innovation: Not “what”, but “how will we know when?”

My first observation is this:

You can achieve innovation by stopping writing “how” key results and starting to write “how will we know when?” key results.

It’s worth quoting what John Doerr says about key results at this point.

Knowing how to progress toward your Objectives is well… key. Objectives must be paired with a roadmap that will help you know whether or not you’re on the path to meeting your goals.

That’s probably the simplest way to think about Key Results: they are the benchmarks you can measure that track your progress toward the Objective. Typically, there are 3-5 of them per Objective.1

I’ve heard OKRs explained on many occasions where key results are described as “how we will achieve our objective”, when in actual fact they are about how you will know that you’ve achieved your objective. “How” is a list of things you are going to do, whereas “know” is a measure that proves the things you are doing are working. This is an important distinction that allows you to respond to change instead of sticking to a plan (more on this later).

Now, in actual fact, there are three different types of key results that you can write: input, output and outcome. Let’s take the example of a politician aiming to get elected in an upcoming election. In planning their campaign, they may express their key results in different ways.

Separate deliverables from outcomes by asking “how will we know when we’ve achieved our objective”, and you will give your teams room to innovate.

Achieve actual outcomes by stopping making up easy metrics and letting your objective force you to put in place the long-lived means to measure “what matters”.

Since Key Results are measurements, we’ll be working with specific goals and numbers.

Oftentimes, this requires a bit of “intelligence” about your organisation. There may be research involved in order to be able to define the best set of Key Results possible.

In order to set benchmarks, you’ll need to know what you’re benchmarking against. This could be progress over your past output or even exceeding benchmarks set by your competitors.

Don’t be afraid to take the time needed to dig in and find the Key Results that will truly matter on the path to your Objective.2

Think about what the harder path is as an alternative? You start thinking, you do some research, you find a meaningful metric, you then put in place a means to gather the data for that metric, you then do some work to make that metric visible and accessible, you then baseline the metric, and then finally you write your key result.

Clearly, this second approach is much harder than the first! But there are clear advantages to it.

Your challenge with binary “to-do list” key results is that:

The advantages of good metric-based key results are that:

Let me note at this point that if you do the work to find great metrics-based key results, what you’ll likely find is that those metrics are likely to be long-lived. If you are really measuring what matters, then those measures will remain relevant for a long time.

Don’t skimp on your metrics, create the right ones by taking your time to research and think about them, do the work to put in place the means to measure, and then keep and extend the right metrics.

The next thing I want to suggest is this:

You can reduce the overhead of OKRs by stopping writing new objectives every quarter and instead writing long-lived, audacious objectives.

I want to relay a true story. I was working with an organisation that was implementing OKRs for the first time, and to get things going they set up a working group to design the process by which OKRs were written, aligned to each other, accepted, and published. Their first draft was of a process that took 10 weeks to traverse end-to-end. So imagine this, you lock in OKRs at the start of a quarter, and you then have two weeks respite before which you need to start determining the OKRs for the following quarter!

Now to their credit, they saw the problem with this first draft, and they iterated over it to reduce the cycle time. But it does illustrate a pitfall with OKRs – if you’re planning quarterly, you want the activity to be as lightweight as possible, whilst being focussing, and effective, so you maximise your return on time investment.

At this point, I want to quote John Doerr again. This quote is directly from his Ted Talk. Have a read.

In 2008, a Googler, Sundar Pichai, took on an objective which was to build the next generation client platform for the future of web applications – in other words, build the best browser. He was very thoughtful about how he chose his key results. How do you measure the best browser? … He said: numbers of users, because users are going to decide if Chrome is a great browser or not.

So he had this one three-year-long objective: build the best browser. And then every year he stuck to the same key results, numbers of users, but he upped the ante. In the first year, his goal was 20 million users, and he missed it. He got less than 10. The second year, he raised the bar to 50 million. He got to 37 million users. Somewhat better. In the third year, he upped the ante once more to a hundred million. He launched an aggressive marketing campaign, broader distribution, improved the technology, and kaboom! He got 111 million users.3

Now I want you to think about this for a second – John Doerr, the creator of OKRs, gets his 15 minutes of fame with a Ted Talk, and what is the example that he chooses to illustrate what OKRs are? Of all the examples he could choose, he chooses the example of Sundar Pichai and building Google Chrome. Specifically, he chose an example that had one objective, with one key result, that lasted for three years.

This example is quite different from the lived experience of many of us where we may have 3-5 objectives, each with 3-5 key results, and these are discarded or re-written at the end of every quarter. In John’s example, Sundar Pichai does the seemingly opposite. Instead of a complex web of objectives, he proposes a single goal that is big, hairy, and audacious – or BHAD. Instead of discarding that goal each quarter, he adjusted the key results to continue to stretch the organisation towards the goal.

To me, this is the power of OKRs – used well, they are an amazing tool for leadership. That is, a means to create focus and to inspire and motivate teams to work hard towards your goal. And focus is achieved by fewer objectives (not more), and inspiration is achieved by objectives that are hard and will take a while to achieve.

Make your OKR process as lightweight as possible, shoot for big goals, stretch those goals, stick at it, and motivate your team.

Finally, my last observation is as follows.

The place I most commonly see people getting confused with OKRs is in relation to how you align a hierarchy of OKRs together. If you imagine the worst possible scenario, you get something like this…

Imagine a big organisation that has the following levels:

Since Key Results are measurements, we’ll be working with specific goals and numbers.

Explicit alignment is when you’ve been given a Key Result as an Objective. We also call this “inheriting” an Objective.

When it comes to Explicit alignment, you’ll be taking a measurable benchmark and using that as your Objective, then crafting a set of Key Results to support it.

Explicit alignment tends to be a more “rigid” alignment, and it works well when an organisation wants to focus or if they’re navigating a crisis.

Directional alignment is when you’re using OKRs from elsewhere in the organisation as a guide for developing your own individual or team OKRs.

Directional alignment tends to be more “fluid” alignment, and it works well when an organisation wants to empower its teams to use their creativity and expertise to achieve organisational OKRs.4

Both of these approaches are simpler than the example I (somewhat facetiously) gave. (Explicit alignment takes the key result from the level above as its objective and then crafts key results to meet that rather than creating a new set of objectives). But note what he says about when to use these – explicit alignment suits a crisis, whereas directional encourages creativity; explicit is rigid, direction is fluid.

There’s another option here that comes from my own experience. That is to set OKRs at the department level and then give those objectives to your teams to work on. When you give the objectives to teams, don’t ask them to write more OKRs, but invite them to ideate on what initiatives they might be able to do in order to move the key results in the right direction and prove that they’ve met your objective.

If you want to evaluate how OKRs are working for your organisation, then try this: ask a few people about OKRs and asked if they look forward to them or whether they dread them? Are OKRs are motivating force in your organisation, or are they seen as a drag on productivity? If the latter, then it’s time for a rethink of how you do them.

OKRs are an amazing tool for driving focus and innovation. They’re a powerful way for leaders to align teams of people behind a big goal, providing motivation to achieve something out of the ordinary.